Heartworm disease or dirofilariasis is a serious and potentially fatal disease in dogs. It is caused by a blood-borne parasite called Dirofilaria immitis. 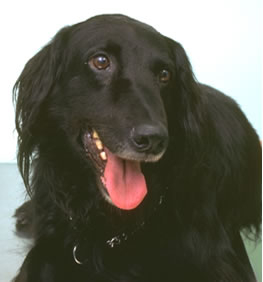 Heartworms are found in the heart and adjacent large blood vessels of infected dogs. The female worm is 6 to 14 inches long (15 to 36 cm) and 1/8 inch wide (5 mm). The male is about half the size of the female. One dog may have as many as 300 worms.

How do heartworms get into the heart?
Adult heartworms live in the heart and pulmonary arteries of infected dogs. They have been found in other areas of the body, but this is unusual. They live up to five years and, during this time, the female produces millions of offspring called microfilaria. These microfilariae live mainly in the small vessels of the bloodstream. The immature heartworms cannot complete their life cycle in the dog. The mosquito is required for some stages of the heartworm life cycle. The microfilaria are not infective (cannot grow to adulthood) in the dog – although they do cause problems.

When fully developed, the infective larvae enter the bloodstream and move to the heart and adjacent vessels where they grow to maturity in two to three months and start reproducing, thereby completing the full life cycle.

Where are heartworms found?
Canine heartworm disease occurs all over the world. In the United States, it was once limited to the south and southeast regions. However, the disease is spreading and is now found in most regions of the United States and Canada, particularly where mosquitoes are prevalent.

It takes a number of years before dogs show outward signs of infection. Consequently, the disease is diagnosed mostly in four to eight year old dogs. The disease is seldom diagnosed in a dog less than one year of age because the young worms (larvae) take up five to seven months to mature after infection. 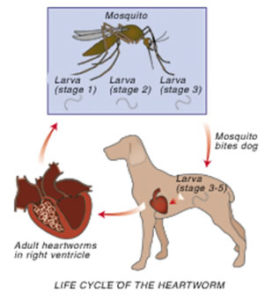 Most dogs infected with heartworms do not show any signs of disease for as long as two years. Unfortunately, by the time clinical signs are seen, the disease is well advanced. The signs of heartworm disease depend on the number of adult worms present, the location of the worms, the length of time the worms have been present, and the degree of damage to the heart, lungs, liver, and kidneys from the adult worms and the microfilariae.

The most obvious signs are a soft, dry cough, shortness of breath, weakness, nervousness, listlessness, and loss of stamina. All of these signs are most noticeable following exercise, when some dogs may even faint.

Listening to the chest with a stethoscope will often reveal abnormal lung and heart sounds. In advanced cases, congestive heart failure may be apparent and the abdomen and legs will swell from fluid accumulation. There may also be evidence of weight loss, poor condition, and anemia.

Severely infected dogs may die suddenly during exercise or excitement.

Microfilariae (Young heartworms): Microfilariae circulate throughout the body but remain primarily in the small blood vessels. Because they are as wide as the small vessels, they may block blood flow in these vessels. The body cells being supplied by these vessels are deprived of the nutrients and oxygen normally supplied by the blood. The lungs and liver are primarily affected.

Destruction of lung tissue leads to coughing. Cirrhosis of the liver causes jaundice, anemia, and general weakness because this organ is essential in maintaining a healthy animal. The kidneys may also be affected and allow poisons to accumulate in the body.

How is heartworm infection diagnosed?
In most cases, diagnosis of heartworm disease can be made by a blood test that can be run in the veterinary hospital or by a veterinary laboratory. Further diagnostic procedures are essential to determine if the dog can tolerate heartworm treatment. Depending on the case, we will recommend some or all of the following procedures before treatment is started.

Serological test for antigens to adult heartworms: This is a test performed on a blood sample. It is the most widely used test because it detects antigens (proteins) produced by adult heartworms. It will be positive even if the dog does not have any microfilaria in the blood. This occurs in about 20% of the cases. Dogs with less than five adult heartworms will not have enough antigen to give a positive test result, so there may be an occasional false negative result in dogs with early infections. Because the detected antigen is only produced by the female heartworm, a population of only male heartworms will also give a false negative. Therefore, there must be at least five female worms present for the most common heartworm test to diagnose heartworm disease. 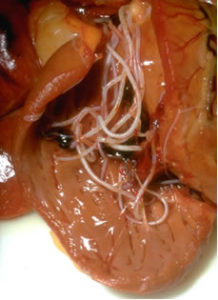 Blood test for microfilariae: A blood sample is examined under the microscope for the presence of microfilariae. If microfilariae are seen, the test is positive. The number of microfilariae seen gives us a general indication of the severity of the infection. However, the microfilariae are seen in greater numbers in the summer months and in the evening, so these variations must be considered. Approximately 20% of dogs do not test positive even though they have heartworms because of an acquired immunity to this stage of the heartworm. Because of this, the antigen test is the preferred test. Also, there is another blood parasite that is fairly common in dogs that can be hard to distinguish from heartworm microfilariae.

Blood chemistries: Complete blood counts and blood tests for kidney and liver function may give an indication of the presence of heartworm disease. These tests are also performed on dogs diagnosed as heartworm-infected to determine the function of the dog’s organs prior to treatment.

Radiographs (X-rays): A radiograph of a dog with heartworms will usually show heart enlargement and swelling of the large artery leading to the lungs from the heart. These signs are considered presumptive evidence of heartworm disease. Radiographs may also reveal the condition of the heart, lungs, and vessels. This information allows us to predict an increased possibility of complications related to treatment.

Electrocardiogram: An electrocardiogram (EKG or ECG) is a tracing of the electric currents generated by the heart. It is most useful to determine the presence of abnormal heart rhythms.

Echocardiography: An ultrasonic examination that allows us to see into the heart chambers and even visualize the heartworms.

Prevention is Key: It is essential to keep you dog on a heartworm prevention program and test annually to insure they continue to be heartworm free. With the safe and affordable heart preventives available today, no pet should ever have to endure this dreaded disease. Call Today for your Spring Wellness Exam and Heartworm Test.