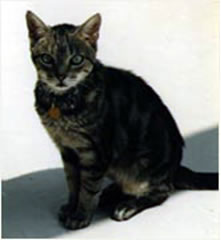 It is not unusual for behavior problems to develop in older pets and often there may be multiple concurrent problems. It is also important to note that some of the changes associated with aging may not seem significant, but even a minor change in behavior might be indicative of underlying medical problems or a decline in cognitive dysfunction. Since early diagnosis and treatment can control or slow the progress of many disease conditions, be certain to advise your veterinarian if there is any change in your pet’s behavior.

What are some of the causes of behavior changes in senior pets?
Many of the problems have similar causes to those in younger pets. Changes in the household, changes in the environment and new stressors can lead to problems regardless of age. For instance moving, a change in work schedule, a family member leaving the home, or new additions to the family such as a spouse or baby, can have a dramatic impact on the pet’s behavior. In addition, it is likely most older pets will be more resistant or less able to adapt to change.

Older pets are also likely to develop an increasing number of medical and degenerative problems as they age. Any of the organ systems can be affected and play a role in the development of a wide variety of behavior problems. For example, diseases of the urinary system and kidneys can lead to house-soiling. Diseases of the endocrine organs such as the thyroid gland and pituitary gland can lead to a variety of behavioral and personality changes. A decline in the senses (hearing and sight), painful conditions, and those that affect mobility may cause the pet to be more irritable or more fearful of approach and handling.

As with other organs, the brain is susceptible to age related degenerative processes that can affect the pet’s behavior, personality, memory, and learning ability. When these changes occur, the pet may show varying degrees of cognitive decline (discussed below) and in pets that are more severely affected, this might be referred to as cognitive dysfunction or senility. Many of these changes are similar to what occurs in aging humans. In fact, the amyloid deposits that are found in the brain of dogs with cognitive dysfunction are similar to what is seen in the early stages of Alzheimer’s disease in people.

How can I find out why my pet’s behavior has changed?
Regardless of age, every behavior case should begin with a complete veterinary physical examination and a clinical and behavioral history. In addition, blood tests and a urinalysis may be needed to rule out organ disease and endocrine imbalances, especially in the older pet. Sometimes a more in-depth examination of a particular organ system may be indicated. Additional laboratory tests, radiographs, ultrasound, spinal tests, brain scans, or perhaps a referral to a specialist may all be appropriate. A decision on which tests are needed would be based on the pet’s age, previous health problems, any ongoing drug or dietary therapy and an evaluation of all of its medical and behavioral signs and the findings of the physical exam. 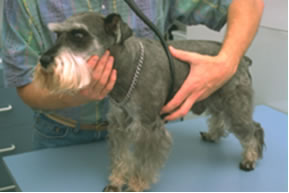 My pet is quite old. Is there any point in doing these tests? What can be done?
Unfortunately many pet owners do not even discuss behavior changes with their veterinarians since they feel that the changes are a normal part of aging and perhaps nothing can be done for their dog or cat. This is far from the truth. Many problems have an underlying medical cause that can be treated or controlled with drugs, diet or perhaps surgery. Hormonal changes associated with an underactive or overactive thyroid gland, diabetes, diseases of the pituitary gland, and testicular tumors can all lead to dramatic changes in the pet’s behavior and many of these problems can be treated or controlled. Degenerative organ systems can often be aided with nutritional supplementation or dietary changes. High blood pressure, cardiac disease and respiratory disease may be treatable with medication, which may dramatically improve the quality and even length of the pet’s life. Drugs and dietary therapy are also available that are useful in the treatment of age related cognitive dysfunction.

What are some things to look out for?
Changes in behavior (see cognitive dysfunction below), an increase or decrease in appetite or drinking, an increased frequency or amount of urination, loss of urine control (dribbling urine, bedwetting), changes in stool consistency or frequency, skin and hair coat changes, lumps and bumps, mouth odor or bleeding gums, stiffness or soreness, excessive panting, coughing, changes in weight (increase or decrease), and tremors or shaking are some of the more common signs that should be reported, should they develop in your pet.

What is cognitive dysfunction and how is it diagnosed?
It is generally believed that, as in people, a dog or cat’s cognitive function tends to decline with age. If your dog has one or more of the signs below and all potential physical or medical causes have been ruled out, it may be due to cognitive dysfunction. Of course, it is also possible that cognitive dysfunction can arise concurrently with other medical problems, so that it might be difficult to determine the exact cause of each sign. Over the past few years the signs commonly attributed to cognitive dysfunctions have been described by the acronym DISH (Disorientation, alterations in Interactions with family members, Sleep-wake cycle and activity level changes or House soiling). However this may not be a sufficiently complete list to describe all of the categories in which a decline in cognitive function might be seen. These might include:

Altered learning or memory as demonstrated by an inability to retrain, loss of performance (such as commands, working ability, or previous training) or house soiling (no longer can remember where to eliminate or how to signal).

In one study of dogs that were 11-16 years of age, 28% of owners of 11 to 12 year old dogs and 68% of owners of 15 to 16 year old dogs reported that their dog exhibited at least one of the signs above. However, it’s important to note that these are signs noticed by pet owners in comparison to when their dog was younger. Research has shown that if you were to try and train your dog on some new learning tasks, that after about 7 years of age many dogs begin to show a decline in memory and learning ability. Similarly owners of older cats reported that for cats 11-15, 35% of owners reported at least one sign of cognitive decline and that this rose to 50% in cats over 15. Treatment options tend to be most effective at slowing or reversing decline when they are instituted early in the course of disease. Therefore, be certain to report any of these signs to your veterinarian immediately. 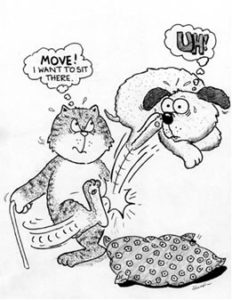 Do pets get Alzheimer’s?
Many of the same changes and lesions associated with Alzheimer’s disease in people have also been recognized in dogs and cats. Should multiple behavior problems develop and these changes progress to the point where the dog or cat is no longer a “functional” pet, the condition may be consistent with senility or dementia of the Alzheimer’s type.

Can geriatric behavior problems be treated?
In many cases the answer is yes. Of course, if there are medical problems contributing to the behavior changes, the problem may not be treatable. The key therefore is to report changes and bring in your pet for assessment as soon as new problems arise.

Dogs that develop behavior problems due to underlying medical conditions may need alterations in their schedule or environment in order to deal with these problems. If the condition is treatable and can be controlled or resolved (e.g. Cushing’s disease, infections, painful conditions) then, as discussed, you must be prepared to retrain the dog, since the new habit may persist. For example, the house-soiling pet may have less duration of control due to its medical problems. If these conditions cannot be controlled, then the pet’s schedule (more frequent trips outdoors), or environment (installing a dog door, paper training) may have to be modified. With conditions that affect a cat’s mobility, adjustments may be needed to the pet’s environment, litter box placement, or type of litter box, (e.g. a lower sided box).

In cognitive dysfunction, an increase in a neurotoxic protein called beta amyloid, an increase in damage due to toxic free radicals, a loss of neurons, and alterations in neurotransmitters such as dopamine may be responsible for many of the behavior changes. Both drug therapy and dietary therapy are now available that might improve these signs and potentially slow the decline. Again early diagnosis and intervention is likely to have the greatest effects.

In both human and animal medicine the diagnosis and treatment of age related cognitive decline is a growing area of concern. In addition to a number of therapeutic agents that are presently in development, a number of combination supplements are now available that use a variety of antioxidant, nutraceutical, vitamin, mineral and herbal preparations for cognitive decline. Although for the most part untested, these products may be useful in improving clinical signs or slowing the progress of the disease.

It is important to note that once new habits are learned, retraining and changes to the environment may also be needed to resolve the problem. For example, in addition to drug therapy, dogs that have begun to eliminate indoors will need to be retrained much like a puppy that has begun to eliminate indoors.  If your pet is starting to exhibit any behavior changes, strongly consider making an appointment for a comprehensive veterinary examination.